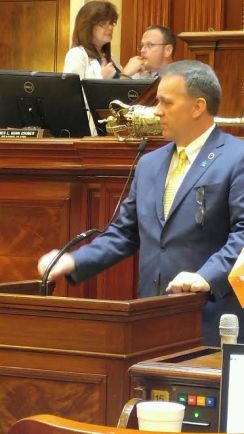 COLUMBIA–On Wednesday, the South Carolina House of Representatives passed a bill that would allow citizens to carry handguns openly and without a concealed weapons permit.

Martin stated that 16 states have passed similar constitutional carry measures already, and that 5, excluding South Carolina, are likely to make this policy law this year. He also stated that of those 16 states, not one has seen an increase in crime rates. “Despite the naysayers and the people who don’t want constitutional carry, not one (state) has turned into the Wild West, not one,” Martin said.

Martin also focused on the Constitution: “Standing in here, just a few months ago, I took an oath. I swore to uphold, defend, and honor the Constitution of the United States. I took that very serious, and I’m sure each one of you do too,” he said. “Ladies and gentlemen, make no mistake about it. The oath you took, right now is coming into play” … “3930 reaffirms the Second Amendment for our people. Remember what we’re voting on, and make no mistake about it.”

Pitts’ bill is set to receive a third reading before heading to the Senate for review, just days before the crossover deadline, by which time all bills must initially pass either chamber in order to have a chance of becoming law this session.